I was going to call this post ‘An open letter to Apple’ but then thought against it. Who can tell what they are thinking over in Apple and cards are kept so close to chests that it is uber difficult to second guess the next big thing that will appear from Apple HQ. Like many of you I was disappointed when iLife 11 came out and there was no update to iWeb; not even any new themes. I remember watching screen-casts of Steve Jobs singing the praises of Safari 5 and how it was the world’s most super browser, but I could never understand why their web design app was lagging soooo far behind. So here is my list of what I would like to see in the next version of iWeb.

I want to stress too that this isn’t a whimsical post. I have thought about this long and hard, and of course I have the benefit of the feedback from almost 4000 daily visitors to help me decide on the best features that should be included, so here I go.

It was a while ago that Patently Apple mentioned in one of their posts that they had found evidence in an Apple patent that there was to be an iPad version of iWeb; quite frankly I can’t wait. If Apple does bring a version to the iPad it can only mean that iWeb for the Mac is getting a redesign too, unless they aren’t planning to let the 2 apps sync with each other.

If a version of iWeb does appear for the iPad then I can see iWeb’s user base increasing. Wouldn’t it be fantastic when you are away somewhere and you have the ability to post things to your iWeb blog? Even being able to do it from Starbucks would be brilliant too.

This has got to be one of my biggest bug-bears when it comes to iWeb. Yes, yes, yes iWeb creates neat and tidy websites with images in the right place and CSS in its place too, but why not create one big folder for images and one big folder for CSS and another for scripts (I could go on). Why is this of benefit? Well if you are adding extra bits to iWeb, such as the Nivo Slider for example, there is no searching for the correct page relevant folder to add the code to, they are go in the same place.

Lose the ‘Domain’ file too 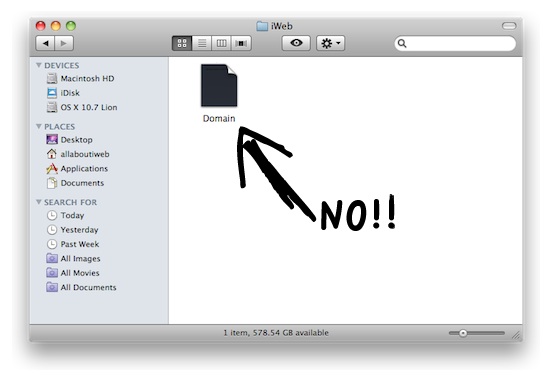 Why oh why as iWeb users can’t we edit regular web-sites? Dare I say it, Frontpage users can! I would love to be able to edit the pages that you get from saving your iWeb to a folder, just like a regular web designer does. Not only that but I would like to be able for other people to edit my iWeb site too, so they can download the files via FTP from my host edit and republish all from their Mac without me having to compress and e-mail the domain file to them; hell we could even edit at the same time.

I know the Domain file is an ideal way of having iWeb back-up your iWeb site for you so that you never lose it and you always have the most up-to-date version on your Mac, but it’s a bit archaic don’t you think?

If Safari is so damn good let us iWeb users make iWeb sites that look just as good on it! Apple claims that Safari is the best browser available, and many (including me) would tend to agree with them, but why, when it comes to making sites that look good and feel modern do we not get the tools to match the browser. It’s like asking someone to hang the Mona Lisa on their living room wall and then giving them a hammer and nail made of cheese to put it there.

It shouldn’t be so difficult to add HTML 5, CSS3 or even JQuery elements to iWeb, which leads me on to my next request;

I want to see the code too

This for me is a biggy. I admit that the HTML Snippet is a neat idea and a really simple solution to adding bits and pieces to your iWeb site, but if I could see the code of the page that I am actually editing then that would be even better. I could add bits of code to the <head> section without having to save to a folder first, I could add tracking codes to my footer section without having to save to a folder first (do you get where I am going with this?). Not only that but the code will actually be on the page I want it to be on, not on another page which then happens to open up within a pseudo-iFrame on the original page. Please, please, please let me edit the code within iWeb.

I can think of many other things that I would like to see in the next version of iWeb, such as better navigation bars, more options for the Photo pages and even more themes, but this list above is, for me, the most important.

What do you think Apple should change within the next version of iWeb? Do you even think there should be another version? Leave a comment and let us know.